Browse: Home » The Buddha is watching

Six months ago as usual I came to Whitby for the Whitby Goth Weekend with friends and had another splendid time with a visit up to the Abbey for their Night of Victorian Gothic, several excellent meals in local restaurants with friends, and of course some spectacular live music performances from some great bands like The Spear of Destiny. 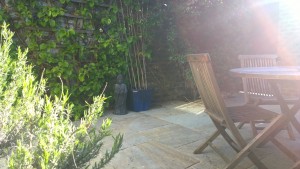 For anyone not familiar with the Gothic Weekends in Whitby, they’re an event in the Yorkshire calendar that has grown and grown over the twenty plus years that it’s been running and these days it sees the entire town jam packed with visitors taking advantage of many attractions of this old Victorian tourist retreat, where incidentally some of the great authors of the day once came to visit and often stayed to pen whatever they were working on at the time.

The last time I came to Whitby, I was also on the brink of publishing my first novel, The Flames of Time, but I was also busy writing my second novel ‘Through Glass Darkly’ and hoping to avail myself of Whitby’s literary vibe I was intent on bringing my writing with me so I could continue working on it while I was here.

Well, the long weekend that was here saw both tribulations and trials on the writing front, as the old Kindle Fire tablet and wireless keyboard I’d brought with me to write with, worked surprising well and I managed to get several thousand words penned which I was thoroughly happy with. Unfortunately, due to a slightly foolish error on my own part about two thousand words of this were accidentally overwritten and ultimately I was forced to go back and re-write them.

As a consequence of that loss, which I find one of the most disheartening things that can happen to you as an author, I have over the past few months tried to tweak and improve how the equipment I use on holiday works, and while I’ve improved it a bit, there was only so much I could realistically do short of buying a new laptop, and a couple of weeks ago now I took the plunge and bought a new Surface Pro 4, tablet and laptop replacement in one, and so far it’s working well, in fact better than I’d hoped.

So here I am six months later back in Whitby, the day has started warm with a clear blue sky and I’m sat in the sun drenched patio at the back of the holiday cottage I’m staying in with my first cup of tea of the day writing away under the tranquil gaze of garden Buddha, while sparrows and other small birds.

That’s all well and good while you’ve got the Buddha watching over you, but what’s to stop you having the same problem you had before, you might ask.

Well, in truth, mistakes can still happen and my work could still be lost, but with my new device I’m running a proper version of MS Word and I’m connected to Microsoft’s OneDrive, which for me means my work is stored with numerous backups of the different versions of each piece of writing I’m working on, so I’m unlikely to have the same problem again. Naturally there are countless other things which can of course go wrong, but for protection against those I’ll just have to rely on the watchful gaze of the garden Buddha.