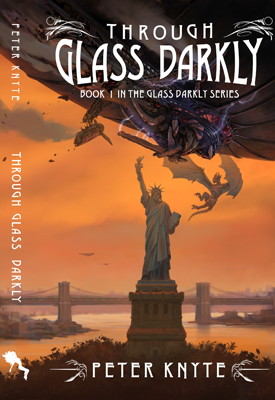 + View Gallery
By Peter Knyte In Dieselpunk and Sci-fi Tagged In #Adventure, #Dieselpunk, #retroscifi and #steampunk.

A free advance copy of this book is available exclusively to my newsletter subscribers.

A monster with a perfect disguise stalks the city streets, preying upon the weak and vulnerable, defiling even those already dead. A savage predator in a world which cannot even see what is attacking it.

In a 1930s America that never happened. . .  the wreck of a huge airship appears over New York City in the middle of a thunderstorm!

Amongst the destruction of this great vessel the captain and crew cling to life,  but this is not the city or the world they left, and these are not the people that dispatched their best and bravest on a desperate mission to stop an enemy of unimaginable ferocity.

How can the crew get back to their own world, when the craft which has been their home now lies in ruins, and when the enemy that has nearly destroyed them appears to have found its way to the city which has taken them in.

The second of edition of this title, freshly re-edited and re-covered will be available from Sept 2021.

This is the first book in my Glass Darkly dieselpunk series.

I often struggle to explain what it is I find so beguiling about this genre of writing and art, but for whatever reason the opening scene in this book, where the ruined remains of giant airship floating nose down above the city streets of New York came to me fully formed, and I couldn’t help but develop the story and universe around it.

This story was so enjoyable to write, I subsequently decided to write at least two more books in the series, the second of which ‘By a Blue and Crimson Light’ was published in late 2017, and the third, ‘A Shadow on the Sky’, will be released in October 2021.