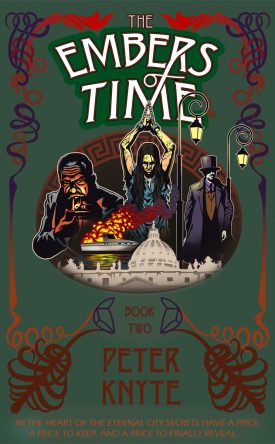 + View Gallery
By Peter Knyte In Adventure Tagged In art.

The Embers of Time

Not sold yet? Download the preview sample (PDF, 4.2 MB) complete with cover artwork and table of contents

The second book in the Flames of Time trilogy.

In the heart of the Eternal City secrets have a price.

A price to keep, and a price to finally reveal. . .

Ancient artifacts which could reveal the secret of life everlasting have been uncovered after lying hidden for an eternity, but after finally being recovered these priceless items have been taken at gunpoint by a shadowy organisation determined to preserve the status quo.

Has this mysterious organisation which seems to have its roots intertwined with those of the Vatican, misjudged the group of adventurers they stole the artifacts from.

Will their warning to leave this particular secret alone, backfire and turn the hunters into the hunted? And will the cost of keeping this one secret end up costing the shadowy religious order the secret of its own existence!