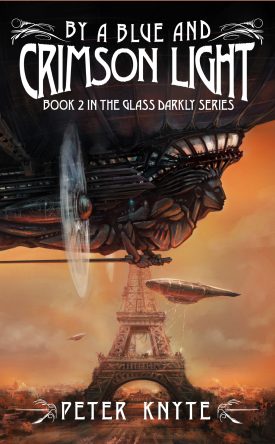 By a Blue and Crimson Light

Lost in the unending expanse between universes, all trace of the path home to their own world is gone. . .

The crew of the great bronze airship Kubla Khan are lost. The path they have been following is gone and they have no idea how to find it again so they can get home.

But amongst the swarms of blood thirsty alien creatures which haunt that deadly place they know as the Expanse, there are worlds so very like their home, which also need help and protection from the monsters.

On another world which could so easily have been their home, the crew of the Kubla Khan give battle once more to the creeping horde of invaders from the Expanse, but while they struggle against the monsters, other enemies, with human faces, are also plotting against them.

Its in this second book in the series that I also reveal a bit more about the principle (human) antagonist, and gave a fleeting insight into this most multi-layered of multi-verses.

I also come back to the theme of the same people being present in different verses and how they are often changed into radically different versions of themselves by quite subtle differences in the world around them, a theme I intend to explore more fully in the third book in the series, which is planned out and I’m just about to start writing.