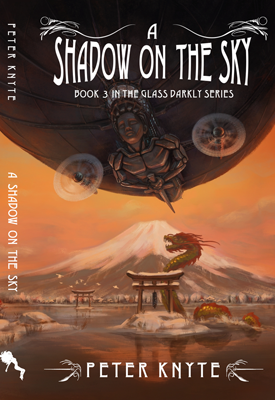 + View Gallery
In Dieselpunk and Sci-fi

A Shadow on the Sky

So when the crew of the Kubla Khan conduct an experiment intended to help them find their way home every precaution is taken, but sometimes even that isn’t enough.

When the experiment suddenly goes badly wrong, Commander Hall is marooned on an uninhabited world with just his wits and his trusty mechanical marine suit suit to help him survive. How long does he have to survive, he doesn’t know, but hopefully the ship has survived and will come to rescue him at some point.

But is this world as uninhabited as it was supposed to be, or is the Commander stranded alone, in the middle of a Japanese winter with only the monsters for company

This is the third book in my Glass Darkly diesel-punk series.

Set on the northern Japanese island of Hokkaido, this book reveals more about the multi-verse in which the Glass Darkly series is set, as well as wrapping up some of the major story arcs for the lead character

I was keen to try and incorporate some elements of Japanese myth and legend into this story, while at the same time painting a realistic picture of the timeless rural landscape of Japan, which existed before much of the modernisation that happened later on in the 20th century had taken place. Both topics were incredibly interesting and enjoyable to research, especially during 2020 pandemic when actual travel was impossible.