Welcome to the official website of author Peter Knyte

I'm in the middle of updating the site at the moment, so please forgive any areas of the site which are still under construction. I'm hoping it won't take long to finish. 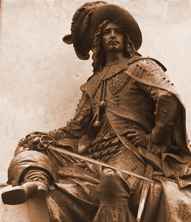 Peter Knyte was born and grew up in North Staffordshire, England, where more by chance than design he first stumbled across the works of J.R.R. Tolkien, Arthur Ransome of Swallows & Amazons fame, David’s Gemmell and Eddings through their Legend and Belgariad series, and met Jonathan Livingstone Seagull through the eponymously named title by Richard Bach.

After leaving Staffordshire, Peter moved to Middlesbrough, Birmingham, London and Leeds during which time he grew to love Neil Gaiman’s Sandman comics, Asimov’s Foundation series, and Rider Haggards tales of She Who Must be Obeyed and King Solomon’s Mines.

Peter still lives in Leeds, West Yorkshire, where he continues to enjoy walking and the countryside, as well as gardening, motorcycling, rock climbing, snowboarding and cooking.

New post: Two down, one to go… knytewrytng.com/two-… It can be strange going back t 15th September 2021

@Martechi What a great concept, love the use of girders and the strange symmetry.